Can program unit, but then it won't communicate

I have the OpenIMU300ZI EVK. It has been working fine for a few days, then stopped outputting packets.

I tried to re-upload the INS bin from the developer center web app. The % progress went up to 100, looking like it was programming it correctly, then it said it failed and to contact support.

I reflashed it with the backed up firmware I saved using the ST-Link. This worked Ok, but the unit was still not outputting anything over the FTDI serial port. Tried to re-flash the INS bin, and same result as before.

I tried debugging from platformio, and it can upload via ST-Link and I can step through the execution. But I get nothing out of the FTDI serial ports.

I tried the recovery tool as mentioned in this post:
https://forum.aceinna.com/topic/133/openimu300ri-can-not-be-detect-after-upgrade-vg_ahrs-app 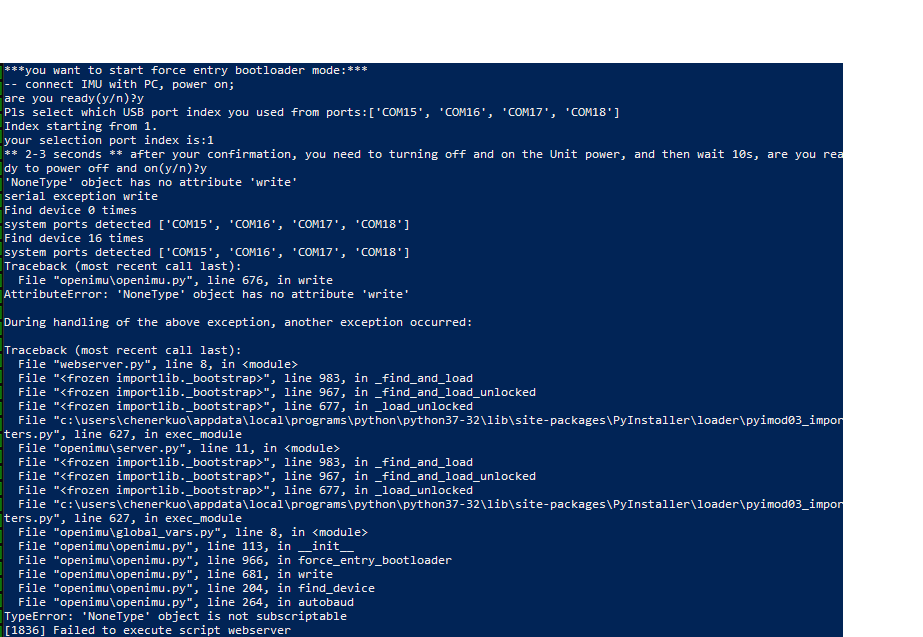 I previously ran the packet output at 20hz, and after turning the device on the LED would flicker. It no longer does.

Unfortunately this project is on a tight timeframe, so I need to know as soon as possible if this unit is faulty so I can order a new one. Please advise.

Note I also see this in dmesg after the device is plugged into a linux host. Note the first line:

Luke, there are some suggestions.

Thank you for the suggestion. I tried it, but even though there is packet output after re-flashing with the ST-Link the original memory dump, after uploading a new .bin (INS app), it no longer can connect to the webserver process.

Sorry to nag, but I'm evaluating this for a project which is on a relatively short timeframe.

Could you please let us know how long it is likely to take to respond to this issue and send through a replacement binary?

If there is no response, you should check the source code.

Using ST-Link, the new bin you sent through will not connect to the webserver process.

Note that if I flash the bin which I backed up after receiving the unit, it does connect to the webserver, however when I then flash the (aceinna developed / official) INS (or other) application through the web interface, after which it becomes unresponsive until I flash the backup firmware again.

I am only trying to use official release binaries at this stage.

The INS app may take more time than other apps while connecting, and to make the connecting more fast, it is better to assign startup parameters when you use webserver.

Please also try to send pG command with a serial port debug tool to make sure the device can response its device info.

I have tried all the public/official apps, and after flashing via the web interface the unit is no longer responsive.

I tried hard coding baudrate and UART device, but it makes no difference.

Here is screenshot with the new bin.

I purchased a new unit, and tried swapping the green circuit board over to the old one. It made no difference, so the issue is in the IMU unit itself.

Please advise how I should go about returning the faulty one for replacement.